Our understanding of whiplash injuries has grown impressively over the last 10 years, when the first detailed analysis of spinal mechanics was done. From countless studies, we’ve seen that the human neck experiences an abnormal motion during a rear end collision, and that the facet joints of the spine can be sprained during such collisions.

Now a new study has looked more closely at what happens to the neck, but this time by studying the anterior ligaments of the spine. Previous studies have shown that some patients experience injuries to the anterior longitudinal ligament after whiplash. This new report by leading whiplash researchers used a sophisticated mathematical analysis (based upon experimental anatomical and crash data) to see what happens to the ALL during a crash. 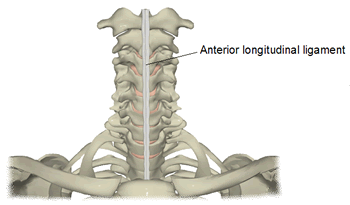 The anterior longitudinal ligament runs
along the front of the human neck, providing
stability for the vertebrae of the spine. During a
rear end collision, this ligament can become
sprained, resulting in pain and even
chronic degeneration of the spine.

The human spine model was subjected to three different collision speeds: 5.3, 6.7, and 8 mph. The amount of distraction, or displacement at each vertebral segment was analyzed.

The researchers found that as the speed increased, the amount of strain increased and the time of the peak distraction also occurred earlier in the motion.

The authors report a number of findings that are relevant to those who work with whiplash cases:

The authors summarize some of the potential serious, chronic problems that can result from these types of injury:

“A possible clinical implication associated with ALL injury is cervical instability. Catastrophic injury of the ALL can result in acute disability while sub-catastrophic injury may lead to chronic pathology. Injuries to the ALL had the highest correlation to extension instability. However, that study also indicated high correlation of ALL injury to axial rotation instability and anterior column injury to lateral bending instability. Injuries produced experimentally in that study were similar to clinically observed injuries. Anterior cervical injuries sustained in whiplash are typically distractive extension stage 1 injuries resulting in an absence of neurologic abnormalities. These injuries are not visible using conventional radiography and result in cervical instability. The ALL is intimately connected to the annular fibers of the intervertebral disc. Presuming all sub-components of the intervertebral motion segment are normal prior to injury, subcatastrophic failure of the ALL (stretch) will likely result in chronic changes within the disc as a result of decreased extension stability. The added hypermobility may lead to spinal disorders such as early degeneration of the connected intervertebral disc or vertebrae. In addition, segmental hypermobility leads to long-term instability. Catastrophic failure of the ALL in a whiplash injury will almost inevitably result in simultaneous injury to the intervertebral disc, and is likely to require surgical intervention.”

This study shows that the anterior ligaments of the spine undergo potentially injurious motion and that this motion may lead to long-term disability. For patients who have experienced a rear-end collision, it is advisable to get a thorough diagnosis to determine cervical instability and the potential for spinal degeneration years later.